Resurrection is a major theme in A Tale of Two Cities, so it is fitting that this opening line perfectly summarizes 2020—most of the year was spent trying to resurrect the economy. Unfortunately, these efforts have created a risk/return prison for investors.

Who Is TINA and What Does She Do?

We spent almost all the latter half of 2020 talking about how cheap money and expansionary monetary policy inflate the returns of the stock market. We also consistently pointed out the discrepancy between economic data (GDP growth) and stock market data (S&P 500 growth).

These themes do not appear to be waning. Between March and November, the measure of broad-based money supply, M2, jumped by a sharp 24 percent. This surge exceeded any in the one-and-a-half centuries for which we have data[1]. Jobless claims remain high while much of the country remains in some form of ill-defined quarantine lockdown. The Federal Reserve as well as the Biden administration have remained consistent in their intention to maintain cheap money policies.

It is tempting to compare present economic circumstances to historical eras for clarity. In our Quarterly Conversation on October 28th, we showed that the current global debt-to-GDP levels have surpassed World War II and explained how currency manipulation can have a similar effect on inflation as did the decoupling of the gold standard in the 1970s.

What is interesting to note is just how different the world is today than it was only a century ago. Consider the following responses to high unemployment and economic contraction:

Treasury Secretary Steven Mnuchin, 2020; “We have a lot of money. We need to get that money in Americans’ hands.”

Andrew Mellon was famously hated for his response to the Great Depression. He believed that economic crashes were a natural part of the business cycle and objected to any government intervention. Today, the money printer is doing everything it can not to overheat.

The problem this creates for investors will likely not be going away anytime soon. Overly accommodative monetary policies across the globe are great for borrowers, but quite the opposite for savers. The best way to illustrate this is mortgage rates – 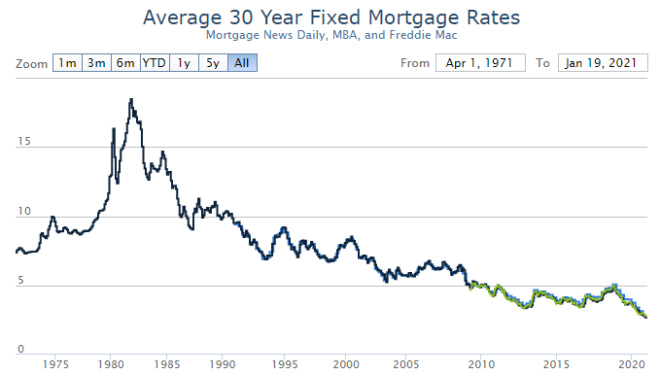 This decades-long march down in interest rates has created a scenario where yield is nowhere to be found as the 10-year Treasury is less than 1%. Bond managers are looking to generate returns through different means which introduce higher levels of credit risk to the portfolio[2]. When comparing these options, many investors are starting to call TINA.

There Is No Alternative (to stocks) has been getting a lot of headlines lately—right up there with “Is the Stock Market a Bubble?” Consider the 2000s tech bubble. At the time, stocks were very unattractive compared to bonds from a risk premium perspective. The 10-year Treasury yielded more than 6%, while the U.S. market’s earnings yield (dividends plus dividends reinvested) was around 4%[3]. Stock investors were looking for growth, not steady income, which lines up with the classical definition of the risk in stock versus bond investing. Today, the earnings yield on stocks remains similar while bonds falter.

This divergence began during the Great Recession and has been exacerbated by the cheap money policies of central banks. The spread between the 10-year Treasury and the earnings yield, often referred to as the “equity risk premium,” is signaling market weakness.

The multi-trillion-dollar war on COVID-19 was not paid for by higher taxes or bond sales to the public, and there is no free lunch. It will be the Treasury bondholder, through rising inflation, who will be paying for the unprecedented fiscal and monetary stimulus over the past year.

Furthermore, the thin equity risk premium means that a spike up in Treasury yields could prompt a sell-off in stocks, as they are widely perceived to be overvalued[4]. Perhaps the best way to sum up the current market is from David Bianco, chief investment officer for DWS:

“People are so accustomed to the idea that inflation is not going anywhere, and markets are very complacent. That means a big dislocation in rates and markets when investors lose confidence in that view. It’s not just the bond market that is dependent on low interest rates.”

With the long-term debt cycle coming to its ultimate reckoning, the absence of inflation, and little alternatives for investors, we can only hope that central bankers will be able to bring us in for a soft landing. That may be a tough putt.

To Tax or Not to Tax

While return expectations appear narrower than in the past, the opportunity for savvy tax planning seems to have never been greater. This is typically the case when there is a changing of the guard in Washington, but the COVID pandemic has created a unique set of circumstances.

The jury is still out on which specific CARES Act legislation will be extended into 2021. With unemployment benefits, PPP loans, and a host of other measures being implemented in a second round of fiscal stimulus, it stands to reason that 2021 may look a lot like 2020 from a tax planning point of view. Required Minimum Distributions from retirement accounts should be forestalled, unless needed for income, until final guidance is issued.

The plan also has a host of other business tax credits and renewable energy incentives, as well as the reinstitution of the $15,000 first-time homebuyer credit first enacted during the housing crisis.

While not every one of these proposals will universally affect taxpayers, it is important to analyze the future impact of these changes. The single most effective strategy to hedge against tax issues is the Roth IRA. Consider the following reasons to utilize Roth strategies for 2021:

The Roth IRA is best known for its ability to generate tax-free growth. If your future tax rate is expected to be higher than your current tax rate, this strategy is a no-brainer. It is not always quite that simple. To the extent that tax rates are a function of income level and tax policy, both of which are unknown variables in the future, a Roth IRA makes sense purely from a tax diversification perspective.

Lastly, if you are not retired yet, a Roth IRA has another major advantage—the ability to withdraw principal without incurring taxes or penalties. For all these reasons, the Roth IRA is an incredibly flexible investment vehicle that may deserve a closer look in 2021.

Albert Barnes and the Question of Intent

The COVID pandemic has many people considering true security in financial assets. Safe havens like U.S. Treasuries are being replaced by the likes of gold, dividend stocks, and even cryptocurrency.

In an interesting research report recently published by Citi, the investment bank analyzed what is potentially the best safe haven asset from an historical perspective; “Art has proven to be an excellent store of wealth over all time periods, easily exceeding inflation.”

While prices are volatile, fine art has developed a reputation of security. And this has been a theme across generations—Sotheby’s and Christie’s, still the two main players in the space, opened their first auction houses in 1744 and 1766, respectively. This came after they saw the success of The Stockholm Auction House, opened in 1674[6].

Consequently, the art investment world has over three centuries of data. And, since art is a reliable store of value, this also means that art investments are consistently intertwined with estate issues.

Consider the example in our own backyard of Albert Barnes—founder of the Barnes Foundation[7]:

“Born to a working-class family, Barnes was an American chemist and self-made millionaire. He made his fortune as the co-developer of Argyrol in 1899, an antiseptic compound. In 1902, Barnes organized the partnership of Barnes and Hille with the co-creator. And in 1929, Zonite Corporation bought Barnes and Hille – mere months before the stock market crash which spiraled into the Great Depression.”

How is that for timing? Barnes bought the land for the original Barnes Foundation in 1922, completed the building construction by 1925, liquidated his business just before the Great Depression, then used a good chunk of the cash to purchase pieces for his art collection.

The collection started in the early 1900s. It grew to be the world’s largest private collection. Albert Barnes was meticulous and somewhat eccentric—his trust included extraordinarily detailed stipulations on the display and purpose of the artwork. Here is an excerpt of the trust language:

“The paintings [should] be hung densely amid medieval relics, African art and modernist furniture. Nothing from the collection should be lent, sold, or moved on the walls and remain exactly as it was [in the original location]. Any society functions, commonly designated receptions, tea parties, dinners, banquets, dances, musicales, or similar affairs [are forbidden].”

Barnes did not invest in art as a passing fancy. It likely had not crossed his mind that his collection was an investment. He considered himself an academic. In his words, “Art appreciation can no more be absorbed by aimless wandering galleries than can surgery be learned by casual visits to a hospital.” Therefore, his trust also communicated his intent for the Barnes Foundation to remain educational in nature and sparingly open to the public.

Originally located in Merion, Pennsylvania, the foundation board announced plans to move the collection to a new facility in downtown Philadelphia in 2002. The foundation insisted that the move was necessary for the survival of the collection. Objectors insisted that this contradicted the wishes of Albert Barnes. Each side released their own versions of the story in competing documentaries—The Art of the Steal and Barnes and Beyond: In the End, Truth Prevails.

Perhaps the most interesting aspect of the entire fiasco was that both sides had the objective of keeping Albert Barnes’ collection intact. Furthermore, the foundation was held within a charitable trust (i.e., not for the enrichment of Barnes’ heirs) and was therefore gifted with a similar purpose. Amid the restrictive controls put in place by Barnes himself, the founding document stated that financial instability would be a permissible reason to explore changes.

Ultimately, the trust was decanted. This is a fancy legal term that essentially means that a fiduciary trustee can change the terms of a trust if unforeseen circumstances are encroaching on the spirit of the original document. The collection was moved to its new home in downtown Philadelphia in 2012.

Barnes was mostly concerned with his intent for the collection, and rightly so, as the societal and legal landscapes evolve. But over a century later, the one constant for Albert Barnes is the value of his art.