Buy low, sell high, and do not eat yellow snow.

The global economy post-COVID has all the trappings of a chapter in Malcolm Gladwell’s The Tipping Point. For those unfamiliar, the premise goes something like this—undercurrents of change tend to be benign until critical mass is reached, and a reversal of long-term trends is triggered by a single event.

There are three long-term trends which have been exacerbated by the easy money policies of the Federal Reserve and U.S. government: increasing asset prices (stocks and real estate), decreasing interest rates, and the absence of price inflation. Since “QE Infinity” and massive stimulus bills were introduced in March 2020, these headlines are getting more attention as common sense economic theory would suggest a turning of the tide.

Policymakers, however, seem undeterred. It looks more likely that the training wheels are going to come off for the U.S. economy. The Federal Reserve has characterized elevated inflation data as “transitory,” and the Biden administration appears to share this viewpoint.

Janet Yellen, former Federal Reserve chair and current Treasury secretary, recently stated, “It may be that interest rates will have to rise somewhat to make sure that our economy doesn’t overheat.” The comments were in the context of the planned $4 trillion of infrastructure and welfare spending over the next decade, rather than the $5.2 trillion economic stimulus enacted because of the pandemic[1]. You say potato, I say po-ta-to.

This is a tricky game. Inflation is typically combated with increases in interest rates or contractionary fiscal policy. The Biden administration is doing the opposite, and the Federal Reserve is still flooding the markets with cash while keeping rates near-zero. It is no wonder—the alternative tends to choke off economic growth and is therefore untenable for policymakers until it becomes an emergency.

The constant reassurance that inflation and rate increases will be “modest” underscores the reality that belief plays a major role in these economic phenomena. In our conversations with clients, friends, and other financial professionals, we have been hard-pressed to hear a dissenting voice that spikes in inflation and interest rates are near on the horizon. 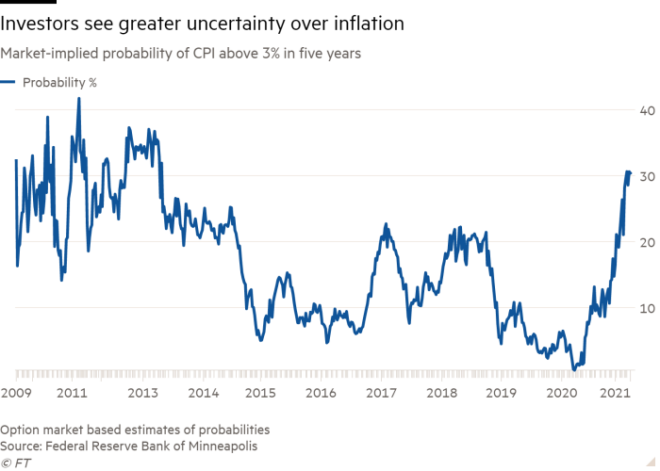 And the market agrees with this sentiment—the chart on the right shows the likelihood of the Consumer Price Index being above 3% within the next five years[2]. It has reached a high of the last decade, comparable to the uncertainty as the U.S. economy pulled out of the Great Recession.

While this has been a discussion point for quite some time, the threat of inflation is becoming more imminent. Businesses are experiencing labor shortages and famous investors such as Warren Buffet are making headlines. “We’re seeing very substantial inflation,” Buffett said at Berkshire Hathaway’s annual meeting in May. “We’re raising prices and people are raising prices to us.”

This adds fuel to the fire for investors already nervous about the market. For this reason, we think that any selloffs will be exacerbated—extreme volatility when jobs numbers are announced, Federal Open Market Committee meeting minutes are released, and news stories of Covid-19 resurgence or variants are reported.

There is certainly a reason for the worry. The consumer price index jumped 5.4% in June from a year ago, a 13-year high, following a 5% rise in May. Wholesale prices have also climbed, portending an increase in costs for consumers. The producer price index was up 7.3% last month, the biggest yearly gain since at least 2010[3].

The American Rescue Plan has pumped a huge amount of purchasing power into the economy, while affluent households are now ready to go on a spending spree. There has never been this much cash sitting on the sidelines—nearly $5 trillion, as a matter of fact. This is significantly above the record $3.8 trillion in cash back in January 2009. Typically, Americans keep 7-8% of their income in savings. In 2020, that rate surged to over 33%[4]. According to the FDIC, more than $2 trillion has been stockpiled into individual bank accounts. This looks like a classic case of too much money chasing too few goods, explaining the recent rise in inflation.

Simultaneously, the economy is booming (at least on paper). The Congressional Budget Office (CBO) expects GDP to grow at a breakneck 7.4% pace this year, and 3.1% in 2022. This would amount to the strongest two-year growth spurt the United States has put together in 37 years.

But alas, the “powers that be” may have a point when they advise to allay inflation fears. The post-pandemic boom, fueled by pent-up demand for services, trillions in extra savings and trillions more in government aid, will fade. The CBO projects that growth beyond 2022 will slow substantially—1.1% in 2023 and an average of 1.2% in 2024 and 2025. These figures represent the slowest sustained growth the United States has seen outside of a recession from data going back to 1929[5].

As the title of a recent article in The Economist points out, there are certainly Fault Lines in the World Economy. The important lesson from the CBO projections is that for policymakers to be successful, the economy will grow at a slower pace moving forward. Eventually, somebody must pay the piper.

The appropriate guidance is to remain invested and prepare for returns to be lower for longer. Fear is likely to be high during the dramatic economic boom (somewhat counterintuitive) and should subside in the leveling off. Robert Shiller, a Yale professor famous for the cyclically adjusted price/earnings ratio, was once quoted as saying, “we have to consider the possibility that sometimes the dominant reason why a recession is severe is related to the prevalence and vividness of certain stories, not the purely economic feedback or multipliers that economists love to model.”

Inflation and the next bear market may have more in common with a Disney princess than economic models—for Tinkerbell to be real, you must believe in her.

Stocks for the Long Run

While runaway inflation may be a red herring, even a return to normal could be jarring. The Federal Reserve’s stated inflation mandate is 2%. Over the last decade, this has persistently been near zero. If you consider the magnitude of this movement relative to the baseline, coupled with investors believing in inflation, it is important to consider hedging your portfolio.

As all our clients already know, we are not tactical by any means. Our investment strategy is a long-term, planning focused, buy and hold approach. Enter dividend stocks.

Evercore, a global independent investment banking advisory firm, recently released a study showing that the 10-year Treasury yield and the performance of high-dividend stocks are closely correlated to the direction of inflation expectations[6]. As bond yields go higher, investors have less desire for Treasuries since bond prices and yields move in opposite directions. Companies paying dividends fit the bill of a “bond proxy,” which attracts extra buying interest that lifts their prices. More importantly, many companies paying high dividends are those that stand to gain the most from a strengthening economy (i.e., well-capitalized, strong cash flow).

Dividend-paying stocks are typically considered to be “value” stocks. According to Cirrus Research, during three of the four major periods when value stocks outperformed growth in recent decades—2016, 1992, and the early 2000s—strong dividend payers outpaced those offering less.

So, while this may be an opportunistic time, this strategy works well from a financial planning perspective as a core part of almost any portfolio:

To illustrate the points of protection and compounding, the best example is the 2008 Financial Crisis[7]:

Time to recovery is the compelling point—in a catastrophic scenario, stable dividend stocks will be filling in a smaller hole with a bigger shovel. Retirees have less pressure to sell distressed investments to create cash flow. Accumulators are buying more shares by reinvesting the same dividends into lower prices. In this way, buying and holding, not market timing, is the secret sauce.

The “inflation trade” will continue sprouting new headlines about how to best hedge your investments. New-fangled schemes such as Bitcoin ETFs (yet to be approved by the SEC), as well as the traditional routes of TIPS bonds and gold will be highlighted. We believe most of this is noise. Stocks of domestic companies with a long history of dividend consistency and growth, strong current cash flow, and exemplary capital stewardship should weather all storms. It is boring, but it works.

From Half Baked to Fully Cooked

Conversations we have had about how to invest in the budding cannabis industry have become too numerous to count. Our initial reactions ranged from “it’s speculative” to “it’s downright risky.” With the advent of some funds tracking the sector, as well as legalizations in a dozen states with more to follow, this is becoming less of a fad and more of a mainstay. Most recently, New Jersey has lived up to its namesake, “The Garden State,” as three bills were signed in February to allow recreational marijuana.

It still feels new, but it has been almost a decade since Colorado and Washington legalized marijuana. Economists and other researchers have had enough time to study the effects of the policy and now have some real findings—here are some of the most interesting[8]:

These data points can certainly have different interpretations, whether you are an advocate or detractor, a user or abstainer, an investor or bystander. This is not meant to suggest investing in the industry, rather to highlight some real information which is no longer speculative. With Virginia appearing to be on the brink of legalizing and several other states likely to follow, this is no longer something that can be written off or ignored.

We hope you enjoyed the topics covered in this commentary. If you have any questions, please do not hesitate to contact us. We welcome the opportunity to discuss our thoughts in greater detail. Thank you for your continued confidence in Planning Capital.